Earth and water, air and sun: the elements that forged British Columbia’s landscapes have also created some of the world’s finest golf. Between the Rockies and the Pacific, rock, earth and flowing water have worked their magic, forming 10 mountain ranges, each layered with valleys and canyons, blanketed with rain forest, grasslands and meadows, and laced with rivers, creeks and waterfalls. Add more than 300 golf courses, many designed by top architects, and you get the picture. Golf in BC is like nowhere else on earth. 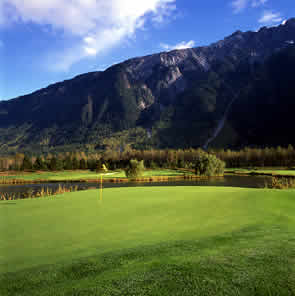 BC’s rock and soil, its slopes, bluffs and gullies have inspired the likes of Jack Nicklaus, Arnold Palmer and Les Furber to fashion unforgettable golf courses in almost every part of the province. The geological drama starts east of Vancouver, where the Westwood Plateau Golf & Country Club, 40 minutes from town on the slopes of Eagle Mountain, tests handicaps with steep ravines and game-changing elevation shifts. Hole 3, or the Gauntlet, played over a ravine to a tiered green, may be one of the toughest par 3s in the province.

Slopes and peaks? Think Whistler. At this four-season resort just two hours north of Vancouver, four championship courses curve across the flanks of the Coast Mountain Range. For elevation change, you can’t beat the Fairmont Chateau Whistler Golf Club, which climbs 122 metres (400 feet) up the slopes of Blackcomb Mountain. For a gentler game, check out Arnold Palmer’s walkable, playable layout at the Whistler Golf Club, or Nicklaus North’s long lakeside fairways. Big Sky Golf Club, a Robert Cupp design in the nearby Pemberton Valley, is, at 7,001-yards, the longest of the four championship courses. Be prepared for the fourth hole; it’s a par 5, dubbed ‘Purgatory’, involving a creek and a water-and-sand-framed green.

Heading east, central BC’s Thompson Okanagan region is a major golf destination: its varied landscapes, from lakeside wine country to desert canyons, host more than 50 championship courses. Around Kelowna in the Okanagan Valley, bluffs and benchlands rise high above a string of shimmering lakes. Blanketed with vineyards, orchards and stands of ponderosa pine, it’s the perfect environment for both rich Merlots and low handicaps. Here, you can play through an orchard at the aptly named Harvest Golf Club, picking fruit as you go; line up shots along the forested fairways of the Okanagan Golf Club; or tee off along the edge of a canyon at Gallagher's Canyon Golf and Country Club.

Further northwest, the lake-dotted high country around Kamloops has more of a Wild West feel, with bluffs, hoodoos, gullies and sagebrush adding drama to such top-flight layouts as Bighorn and The Dunes. 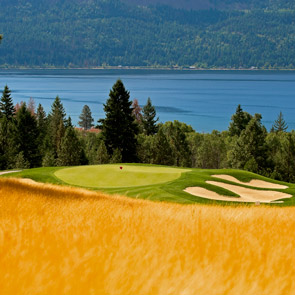 Alpine streams and waterfalls, breezy seashores, lakeside greens and meandering rivers: water is key to BC’s landscapes and essential to the golf experience here. It can be a scenic backdrop or a game-changing splash zone; often it’s both. At the Olympic View Golf Club near Victoria, where a 12-metre (40-foot) high waterfall backs the 17th green, it’s all about serenity. In all, two waterfalls and 12 lakes, plus views of the Olympic Mountains, grace Olympic View’s forest setting. Furry Creek Golf & Country Club, on the other hand, boasts the ultimate water hazard: the Pacific Ocean. Just north of Vancouver, this challenging course plays across the steep shore of Howe Sound, BC’s most southerly fjord. A highlight? The 14th hole, known as the Tee-to-Sea, calls for a drive across water to a peninsula jutting into the sound.

In central BC, lakes provide a dramatic focus; here, they act as scenery, water hazards and even places to swim, paddle or cast a line post-round. An example? Talking Rock Golf Course in Chase winds through a forest to finish with an 18th hole set along the shores of Little Shuswap Lake. At Tobiano Golf, perched high on a bluff over Kamloops Lake, water views shimmer from every green; some holes, dubbed infinity greens, appear to float untethered against the blue and silver lake. 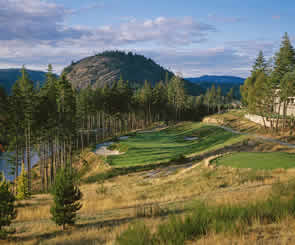 At some BC golf courses, the game literally takes to the air as balls soar across gaps and gullies to island greens and rocky outcroppings.

At the Westin Bear Mountain Golf Resort & Spa, a Nicklaus Design 36-hole duo near Victoria, the Mountain Course offers plenty of air with its island greens, cliff-edge holes and elevation gains. Here, the 14th hole is simply unforgettable: it’s played across a gap to a cliff edge against a city and ocean backdrop. The neighbouring Valley Course shows Bear Mountain’s gentler side as it winds through the forest among lakes and creeks.

Greywolf Golf Course, set nearly 1,200 metres (4,000 feet) up in the Purcell Range at Panorama Mountain Resort, makes the most of the area’s jagged peaks, and glacier-fed creeks with steep elevation changes and long drives across whitewater creeks. The 6th hole, dubbed Cliffhanger, lies on a plateau green with sheer drops on three sides. 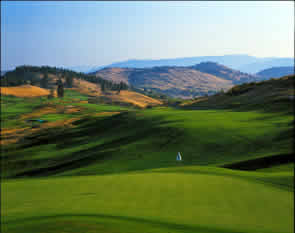 BC’s many micro-climates add up to one unavoidable fact: the province enjoys some of the nicest weather in Canada. An evening round? No problem. The province’s northerly latitude keeps the sun up late on summer nights.

If you like it hot, head to the Thompson Okanagan, where dozens of golf courses enjoy long sunny summer days and cooling lake breezes (the area’s Merlot vines are counting on it, too). At Predator Ridge, a highly rated 36-hole duo in the northern Okanagan, the sun’s warmth turns the landscape to gold by September.

Further south, near Ole weather is also kind to coastal BC, where the mild climate keeps golf courses on Vancouver Island and in Metro Vancouver open year-round. Whether it’s the lay of the land, the beauty and challenge of water, the clean air and altitude, or the long sunny days, all four elements come together beautifully on BC’s golf courses. Wherever you golf here, you’ll be in your element. Learn more about golf in BC at GolfinBritishColumbia.com or HelloBC.com/golf. For more on British Columbia’s destinations and travel information, visit HelloBC.com.

Courses in This Story